I still have Grandpa Art’s typewriter.

My grandfather kept a small manual typewriter with him when he traveled so he could keep in touch with family and friends. He hunted and pecked his way through many long, detailed letters describing the places he visited, the people he met and the meals he ate as he and my grandmother spent their retirement years roaming around the U.S. in an Airstream trailer holding most of their worldly possessions.

I never understood why he spent so much time describing the food, much of which he enjoyed at low-budget buffets (Luby’s was a favorite).

I finally get it.

From the moment Dan and I started our long-dreamed-of sabbatical, I kept my own copious notes about what we were eating. Sometimes I’d even snap a picture.

At first I thought this was just a new iteration of my naturally compulsive side. Without the burden of overwhelming “to do” lists for work and home, my brain needed something to grab onto as I eased into a more relaxed state of being.

It wasn’t until we hit our fifth country and eighth city in 18 days that I realized why I needed to remember the food: It triggers the memories of everything else. 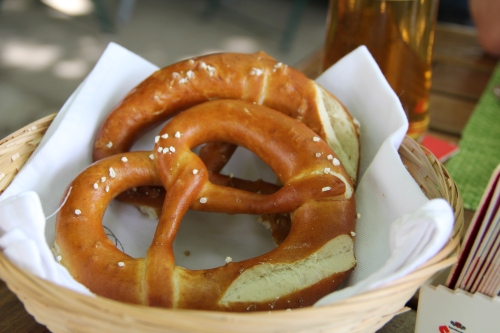 Pretzels on the patio cafe at Panorama Restaurant at the Salzburg Fortress in Austria.

When I remember the food, I remember the feelings. The giddy sense of freedom as we enjoyed pretzels and beer on the patio of a restaurant with breathtaking views of the Alps. The sheer joy of shared discovery when we stumbled upon a restaurant with an innovative menu and a quiet outdoor table sheltered from the noisy city street by a natural wall of shrubbery. Feeling that the whole town was celebrating with us as we emerged from a special-occasion dinner within the tunnel wall of an ancient stone city to find that an evening street fair had erupted while we were eating.

Even the less magical meals — the night we ate hamburgers at the hotel because we were simply exhausted, the disappointing minestrone soup — carry memories I cherish for the lessons they taught me. Extraordinary days usually just happen; it is the serendipitous nature of an unexpected experience that makes these moments so special. Ordinary days have their own, quieter purpose: a chance to rest from the constant stimulation of newness. Time to process and be grateful.

For two months, Dan and I explored walled cities and majestic churches. We saw expansive bridges and imposing castles, swollen rivers and lush farmlands. We absorbed heartbreaking stories at a number of historical sites. And we rarely ate a meal in the same place twice.

Every place. Every meal.

Mackerel grilled over an open flame at the Fränkisches Bierfest (Franconian Beer Festival) held in the moat of the castle in Nürnberg, Germany.

A World Cup-inspired sandwich at the train station in Nürnberg, Germany.