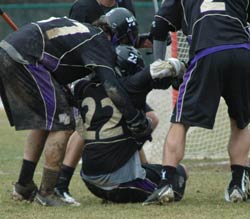 My husband and I are staying in Baltimore for a week so we can enjoy our son David’s last hurrah as a collegiate athlete. His lacrosse team, the Whitter Poets, has traveled to the East Coast for a four-game swing through Maryland and Delaware. It’s a “two-fer” for us because our other son, Andy, works in Washington, D.C., a mere hour’s train ride away. Yesterday, all three of us were able to attend the Poets’ game in Towson against the Goucher College Gophers.

The day was rainy, drizzly and dreary. I’ve been battling a bad cold since the middle of last week. But the game was fast-paced, competitive and exciting, so all those extraneous factors quickly drained away as I pulled out my camera and starting snapping pictures.

I positioned myself at the end of the field where the defensive players hang out. David is a “long pole” whose job is to protect the goalie. I was fiddling with my camera settings when I looked up and saw him crash — hard — into a Goucher player.

I quickly lifted my camera, knowing the long lens would give me a close-up view so I could figure out if David was really hurt. At first, he started to get up. Then I saw him slump and fall back to the ground. With the help of some teammates, he was soon back on his feet and limping slowly back to the sidelines. Not 10 minutes later, he was back in the action.

After the game (which Whittier won 10-9), we asked him what had happened.

“I blacked out,” he said. “I’m fine now.” Visions of poor Natasha Richardson filled my head and mommy-paranoia bubbled to the surface. “Are you sure you don’t have a concussion?” I demanded. “Do you need to go to the hospital?”

“Mom. The trainer checked me out. I’m fine.” This from the guy who had told me just a few hours earlier that he “might” have a broken heel from a collision in last week’s game against Union College. The guy who opted not to get an x-ray because he’s a senior and a confirmed diagnosis would end his season. The guy who’d rather hurt like heck than know for certain that his days as a scholar-athlete are over.

I never played a team sport and I can only imagine the guts it takes to persevere past pain and disorientation, to request more playing time even when it could mean further damage to an injured body (or brain). I don’t know where he got that determination.

And yet I wonder. My son has watched for years as I’ve struggled to keep my little business alive. He’s seen me work long past the point of exhaustion, ignoring hunger, illness and physical discomfort because something needed to get done. He seen me persevere past seemingly insurmountable barriers over which I had no control. I kept getting up the next morning and going back for more. He saw that.

There are many ways to take the hard knocks. When you know the end result is worth any temporary inconvenience to self, you don’t even give it a second thought.